The game, as well as being always a recreational activity, entertainment, cultural exchange and enrichment, over time has become a means that stimulates the creativity.
The reason that led me to dedicate this page of my website to some videogames is very simple:  some mythic videogames helped me in studying Computer Programming stimulating my creativity and curiosity.

If a brief history, a little of Maths and some curiosity is not enough, with a online Javascript version of some videogames you can also have the possibility to have fun. 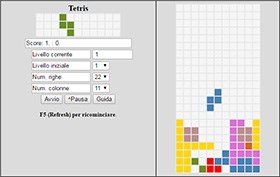 The Tetris name derives from the greek word "tetra" which means "four" because the "bricks" that make up the game are formed at most by four pieces. These, combined with other bricks (with at least an entire side joint) make possible seven figures; each of them takes its name from the following letters of the alphabet of which reproduces the shape:

The game consists in rotating and moving these figures so that you fit them, without spaces, in order to achieve a whole line of blocks. The new completed line is immediately deleted to make room for other figures, so that the bricks don’t pile up. Accumulating incomplete lines the game becomes more difficult.
Adding to this difficulty the time factor, the Tetris success was world-wide.

Today Tetris, thanks to the creation of versions for mobile phones and smartphones, maintains its popularity.

From a mathematical point of view the Tetris was object of studies which have demonstrated that the game concludes in any way with the defeat of the player, because in the figures random alternating certainly occurs, sooner or later, the sequential appearance of S and T figures that will lead to the inevitable defeat. 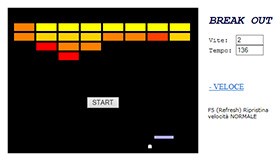 In 1976 appeared for the first time the game Breakout developed by Atari and designed by Nolan Bushnell and Steve Bristow. Influenced by its predecessor Pong of 1972, in a few years became a success. It was adapted to all systems and countless are its variants appeared over the years.
The basic principle is simple: hit the bouncing ball and break down a wall of bricks.
Certainly many people remember the version named Arkanoid.

In 1883 the french mathematician Édouard Lucas (1842-1891), the number theory scholar who became famous for "the analysis on the Fibonacci sequence(1)" and creator of countless games and puzzles, invented the "Tower of Hanoi" game. To draw more attention to this game he invented the ancient Indian legend of the Tower of Hanoi.

The legend tells that in the Temple of Brahma in Benares(2), under a dome that represents the center of the world, it is located a brass plate on which are placed 64 golden disk threaded on a needle. Monks move one at a time disks on another needle according to the rule that a large disk can never be put on a smaller disk. When all disks are moved, recreating a Tower on another needle, then comes the end of the world.

Often, in internet this legend is considered incorrectly real, taking away the merits from the mathematician Édouard Lucas. I remembered it only as a curiosity.

The computer game consists of three needles, but only on one of them there are threaded some disks of different sizes (at the bottom the largest and at the top the smallest).

The game has only two rules:

The aim of the game is to place (by moving them) all disks on other needle so that they are always located in the same order.

Mathematically it happens that:

Theoretically the game could be done with a larger number of disks, but the player should have a long free time; if to move only 32 disks are needed 232 - 1 moves, that is 9.223.372.036.854.775.807 moves and imagining to perform a move to the second... I leave you to calculate how many years are necessary to complete this super game.

1) The succession or numerical sequence takes its name from Leonardo Fibonacci the Pisan mathematician of the 13th century.
2) Benares, today named Varanasi, is considered cultural capital of India and the holy city of Hindus; it is located on the Ganges banks and has the characteristic of being the oldest living city in the world with its 3000 years of history. 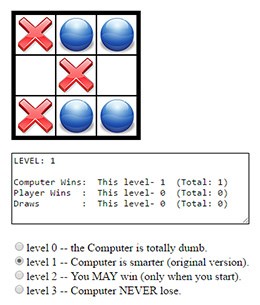 Tic-Tac-Toe is a popular and simple game dating from the times of the ancient Romans.

You play on a grid square of 3 x 3 boxes. In turn, each player selects a blank box and there draws its symbol, which can be "X" or "O"; obviously if a player chooses the "X", to the other remains the "circle". The player who manages to have three of its symbols in horizontal, vertical or diagonal line WINS; if both players fail in this effort, then the game ends in equality.

Being the game very simple it has a "perfect strategy". Since the number of situations is very small, you can write a program that plays perfectly to Tic-Tac-Toe without never losing, in fact, Tic-Tac-Toe in 1952 was the first game in history to be played by a computer. 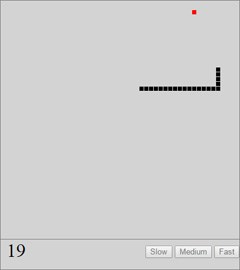 The first version of this game appeared in 1976, and in 1978 it was made the microcomputer version named Worm.
Since the game was adapted to all devices, including mobile phones and smartphones, and countless are made variants.

It is very easy to play: the snake increases its length while collecting objects in its path, but can never touch the walls or itself.

The contents of this page have been presented for informational, educational and ludic purposes.
Some ancient games have been adapted for PC.
The Javascript versions of the games I found in internet and made available from my website and playable directly online through your browser, have been created by other programmers.
The original copyright information and intellectual property provided by the authors of the games are clearly indicated in the html code of each page that is hosting the game.
Despite having verified and tested the code for each game, I do not guarantee that they are compatible with all browsers, free of errors or that they cannot cause malfunctions.
The only changes made by me to the original code of the games regard the italian translation, the improvement of the parameters relating to the speed of the game and some graphic adaptations.